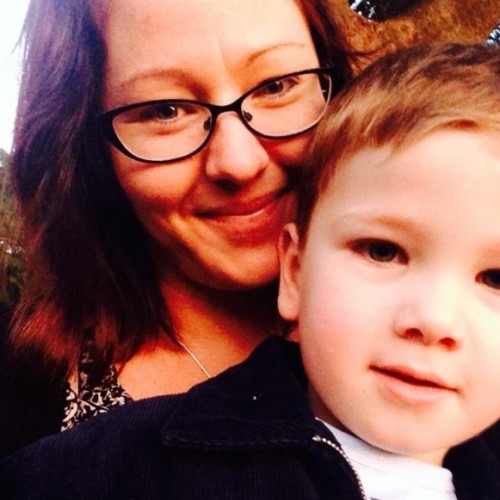 I want to share my story to share the importance of having regular Pap tests, regardless of whether you have had the HPV vaccine.

This is what can happen if you delay your pap smear.

In 2008 I had a Pap test that came back completely normal. I went on to have my second son in 2009, and after a complicated pregnancy and horrific pre-term delivery (which I later found out that it was all caused by the tumour we didn’t know was there) I was just happy to be home and away from the poking and prodding of doctors and didn’t follow through with a follow up appointment including a Pap test.
In 2011, at 30 years of age, I started to experience sharp pain in my pelvic area that wouldn’t go away for months (the only symptom I had). As the pain got worse I decided to book in for a Pap test and the doctor said everything looked ‘normal’. Two days later I received a phone call from the surgery to make a follow up appointment.

I went in thinking it must just be early cell changes, and all would be fine. The doctor looked at me and said “you have cancer”. I still remember the moment like it was yesterday, as though it wasn’t real, but all the words that followed just melted away. She sent a request off to the gynaecological oncology team at my hospital and I left. Telling my family was the hardest thing I ever had to do, I was an absolute mess. I couldn’t tell my 10 year old son until I knew what I was dealing with, so I had to keep it together for his sake.

Two weeks passed, and I still hadn’t received an appointment from the hospital (turns out the request from the GP was sent to the wrong department). Those two weeks were torturous. I had no idea how advanced the cancer was, and all I could think about was how my sons and husband could go on without me and how I could help to make it easier for them if I did die. Lying awake at night I was convinced every little pain was the cancer that had spread through my body. I finally went in to the hospital for a colposcopy and to meet the oncology team. They were absolutely amazing and supportive. The test results came back as Adenocarcinoma Stage 1B2 (a rarer type of glandular cancer). I then had scans and X-rays to see the cancer and check how far it had spread.

At my follow up appointment, I was told i had a 6 cm tumour (which was up very high inside the cervix and would have been more difficult to detect with earlier Pap tests). The plan was for a radical hysterectomy and removal of ovaries and pelvic lymph nodes. The medical team were confident that it would successfully remove the cancer. Armed with this plan I felt positive for the first time since being diagnosed and I knew this cancer was not going to beat me.

I went in for surgery two weeks before Christmas, December 2011. I woke up in recovery with my husband holding my hand and the doctors taking the tubes from my throat and fell asleep.

12 hours later I could hear the news on someones TV that Molly Meldrum had fallen from a ladder and was in a coma, I remember feeling so concerned and sad for him! The next 10 days were full of horrific pain and struggle. I had a catheter for 10 days, I was suffering from sudden surgically induced menopause, and saying good bye to my boys every day was heart breaking. It was a horrible experience, but I made it home for Christmas with my husband and my precious boys.

The results came back with clear margins but they found cancer cells in the lymph vessels, so after recovering from surgery enough to endure it I had to have six weeks of daily radiation to make sure it would never return. I suffered from terrible burns and fatigue for weeks. It has been a long road, and I am left with a lot of pain (and pain medication) from side affects of the radiation therapy and surgery. I suffer from pelvic insufficiency fractures, nerve pain, and painful adhesions from the surgery. I can’t have hormone replacement due to the type of cancer it was, so I manage menopausal symptoms as best as I can with a healthy diet. Four years later, I am still clear of cancer and will be around to grow old with my husband, and see my boys grow old too.

I will never be the same person I was before. I live in fear of every little pain and deal with a lot of anxiety, some days it consumes me. I now have a new perspective on life and I am studying nursing at university to maybe help someone through what I experienced and educate women about their health.
Please.. everyone get regular Pap tests.

I was two years overdue for mine, and this was the outcome.

Get your pap smear regularly…

Don’t develop a false sense of security just because you have had the HPV Vaccine. Cervical cancer still exists without the presence of HPV.

A Pap test is the only early detection tool in the fight against cervical cancer.