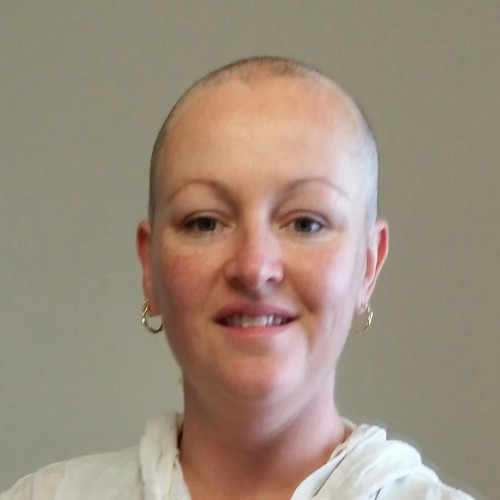 My name is Amber. I am 32 years old, a mum of two beautiful kids, a fiancé and I have cervical cancer.

In April 2015, while 29 weeks pregnant, I found some fleshy cells (honestly the only way to explain it) in my underwear while at work. I had been to see my obstetrician the previous day but knew what I had found wasn’t right, so headed to the hospital where I was booked in to have my baby. The doctor attempted to examine me but being pregnant there was so much more blood and pressure in the area, as well as not being able to see my cervix.

What followed was a whirlwind of tests, appointments and referrals to specialists in Melbourne. A week later I was diagnosed with cervical cancer. My tumour was large, estimated at 8 cm, however had not spread to any other areas. Unfortunately due to the pregnancy, a biopsy or examination under general anaesthetic could not be done, because of the risk to bubs. Surgery was not an option for me, due to the large size of the tumour.

By this time, two weeks had passed. On specialist advice, I was given three weeks to grow bubs before he was born early via c-section at 35 weeks, so I could start treatment. Thankfully he was strong and healthy and from the visual during surgery, it looked as if the tumour had not grown any more.

Two weeks post surgery, I started two rounds of carboplatin and paclitaxel, to hopefully shrink the tumour while waiting for my uterus and cervix to return to normal size after bubs. The main form of treatment for cervical cancer is radiation, but the area needs to be the same size to reduce damage to other organs and increase the success of the treatment.

This chemotherapy was horrible. I lost my hair, had terrible stabbing pain for 7 days, nausea, a metallic taste in my mouth and ended up being admitted to hospital with high temperatures. When you have low immunity due to chemotherapy, a temperature of 38 degrees Celsius warrants a hospital stay and intravenous antibiotics to ensure you don’t have a major infection. This happened to me four times over the course of my treatment.

At the end of these two rounds, I went for a PET scan to finally stage my tumour and assess the next step. Unfortunately the chemotherapy did not shrink the tumour much and I was advised I would need 5 weeks of intensive chemotherapy and radiation, along with three internal radiation procedures (brachytherapy). I was staged as 1B2, as the tumour was localised to the cervix. The treatment is specialised and I was told needed to be done in Melbourne. As I live in country Victoria, we had to relocate for 6 weeks with a 3 year old and 4 month old baby!

I had a 6 week wait to get my treatment booked and accommodation sorted. The wait was horrible emotionally and mentally, wondering ‘when will the treatment start?’ and ‘is the tumour growing?’. It was great having the time to recover a little from the chemotherapy and spend time with my family though.

I started my 5 weeks of treatment, including radiation Monday-Friday and chemotherapy weekly. I was given cisplatin, which was not as strong as my previous chemotherapy and I managed the symptoms a lot better. I ended up with the metallic taste in my mouth and a lot of fatigue. Not fun with little kids!

In total, I was given 25 sessions of radiation and 5 of chemotherapy. The next week, I started the brachytherapy procedures. Unfortunately my tumour had not shrunk enough for the brachytherapy to be successful, so I had to complete a 6th week of radiation. I am currently waiting a week to let the treatment work and am booked in for the brachytherapy in a weeks time. I am hopeful the procedures can be done this time and then I will have a 6 month wait before another PET scan can be done to tell if the treatment has been successful and if the tumour is gone.

I am looking forward to spending time with my kids, my family and friends and recovering from the treatment during this time. Being busy helps to keep my mind from worrying/stressing. What will be, will be and going through this experience, however horrible has taught me to relish in the now and live life to the full.

Since my diagnosis, the amount of support from family and friends has been amazing! I would like to thank each and every one of you for your help and support, without you, I wouldn’t be where I am!

During my pregnancy, I had some unusual symptoms such as heavy discharge, bleeding during intercourse and random bleeds. I reported these symptoms with my obstetrician, however was told they are consistent with pregnancy.

They can be, but I felt something was not right. I didn’t get a second opinion, as I trusted the professionals and didn’t think to push to get it checked out.

Things do happen for a reason and I am positive I can beat this awful disease. I was able to produce two beautiful children and they need their mum!

Get checked and make sure you don’t put off getting a Pap test done.

You know your body the best, if something isn’t right get it checked out and if you’re not happy with what you are told, get a second opinion.