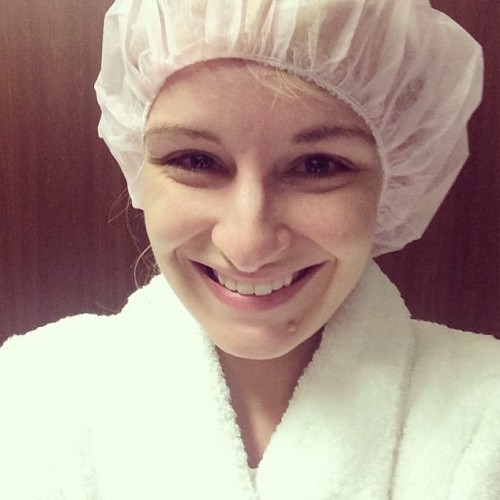 This is me just over a year ago – preparing to go into surgery for what was a relatively minor procedure to prevent cervical cancer, after my Pap test showed ‘high grade abnormalities’.

I was actually prompted to get screened after reading an article by ACCF Ambassador Sarah Maree, about how a Pap test saved her life.

I posted the photo on Instagram with the hashtags ‪#‎nomakeup ‪#‎braveface ‪#‎surgeryselfie – but that was basically a lie.

What you probably can’t see from the pic is that I cried for a solid hour or more before going in. Because I’m a total hypochondriac, I’d convinced myself I was going to die on the operating table (I’m unable to find any extensive research on this, but I’m pretty sure the exact number of people who’ve died during a LLETZ/LEEP procedure is approximately 0). I was crying so much the nurses thought there had been a mistake and I must have been in for a hysterectomy (which unfortunately is a reality for women in the more advanced stages).

I was also scared the procedure wouldn’t work. Like many women in this situation, it was the first time I’d heard the word cancer in relation to my own health, and of all the scary unknowns, it’s the big one.

That’s when I made a deal with ‘the universe’ – if it all turned out fine, I’d ‘pay it forward’, by becoming a volunteer for the ACCF and try to spread the word about the importance of regular Pap tests to other women.

My case was boringly common – the treatment eliminated all the bad cells and the virus that caused them (HPV) before they became a bigger problem. But it’s not always so simple. Cervical cancer is serious, but it is almost entirely preventable and treatable if it is caught early.

So here I am coming good on my promise. I can’t be sure, but I imagine reneging on a deal with the universe could end badly.

As uncomfortable it is to talk about, it does make a difference. If it hadn’t been for the work of the ACCF I probably wouldn’t have had my Pap test until much later, and by then it could have been a much bigger problem requiring more invasive treatment.

If you’re putting off having your pap test – just do it. It literally takes five minutes, and it could save your life.