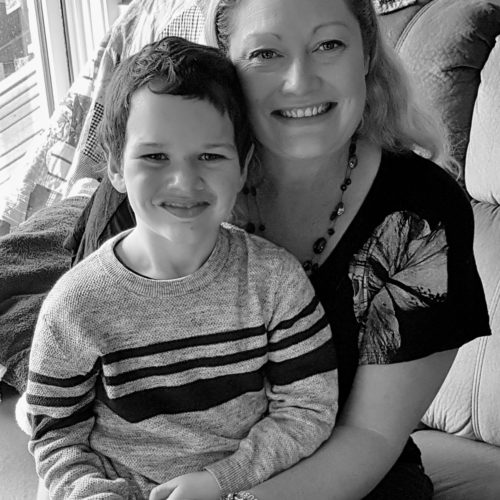 I had my son in 2012 and towards the end of the pregnancy I was getting ulcers in my mouth and inside my vagina. I was 38 and the doctor was concerned so they did a pap smear immediately after my son had been born which came back negative. About 4 years after having my son I was getting irregular bleeding, but no other symptoms. I put it down to starting perimenopause since my mum went through menopause at 31.

I decided to finally get it checked out. The new Cervical Screening Test was introduced in December and I had my cervical screening done in Feb 2018. I started getting left hip pain which was getting worse and worse. I got a call from the nurse to say my cells were irregular and I needed to see a gynaecologist. She said “its just a change in cells, its not cancer.” So I didn’t put any urgency on the issue and went along to the gynaecologist two months later. I was by myself and the gynaecologist kept saying ‘this is bad, this is bad, this is really bad.” My heart sank and I knew what she was going to say. She was in complete panic and said “I know you have no one here with you but I think you have cervical cancer.”

I was booked into an ultrasound the next day but the gynaecologist forgot to tell me she left wadding up in my vaginal canal as it was bleeding from the colposcopy. The poor radiologist who did the ultra sound had a very strange look on her face and summoned the head oncologist who soon figured out what was going on. “Phew” she said, “it’s not as bad as we thought. You have a 3 cm tumour that looks like it has permeated one of the walls and spread to the top right hand side of the vaginal wall.”

Off to Monash Moorabin for a CT and PET scan. Next came the oncology appointment where she confirmed that it was a 3cm tumour but it was contained so would require 3 surgeries. The first day of surgery I was nervous as hell, there were about 12 people in the operating room and my dry sense of humour couldn’t get me over the humiliation of what was about to happen. With all these people staring up my vagina I couldn’t help but say “grab some popcorn and enjoy the show.” They all laughed as I went to sleep.

The second surgery was to test the lymph nodes. The waiting for 24 hours for the result was the worst. When my oncology doctor came in I could see he had a gentle smirk on his face. “I have good news” he said, “the lymph nodes are clear but now you have another surgery.” It took all my mental power to get through that last surgery. I wasn’t going to give up but I knew it was going to be a tough time. I got the all clear after my third surgery and still have to have check ups regularly but I survived. No chemo or radiation needed.

I felt so lucky, but survivor guilt set in of all the others who weren’t as lucky as myself. I suffered a lot of PTSD and one day had suicidal thoughts, only because I felt like the last 3 months were so out of my control I wanted to be in control of something. I was numb and asked my husband to seek help. We saw a psychologist and immediately felt better as she confirmed that I had been through a lot in the past couple of months. I am pleased to say I am doing well, keeping up with my exercise and staying healthy. I still get left hip pain but it is getting better. My sister in law just passed away from small intestine cancer that had spread as she didn’t get to a doctor in time. I feel so grateful that each day I get to have the sun on my face and live life, while spending more time with my son and never ever taking life for granted.

Any bleeding, increase in urination, constant back or hip pain please get it checked out immediately!