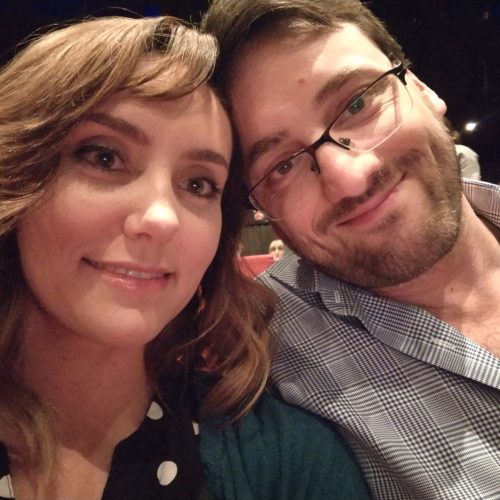 My only symptom was at 31 weeks pregnant when I had some bleeding. I went up to the hospital straight away and was told the baby was fine. Unfortunately though, the obstetrician felt a large mass. I had a spinal tap, biopsy and an MRI and was given a diagnosis of Stage 1b2 adenocarcinoma cervical cancer.

I had received the HPV vaccine. I had previously been up to date with my cervical screening and had been due to go for this at the beginning of 2016 but didn’t because I was pregnant. I feel like the fact that I was pregnant perhaps hid the symptoms; when I had the bleeding before I was diagnosed, I just assumed it was something to do with the baby.

I had a caesarean at 35 weeks pregnant to deliver my son, who is now almost two. They wanted to wait until I was at least 34 weeks so that he had developed the sucking reflex and would hopefully be able to breastfeed.

I had surgery where they took out a metastasised lymph node as well as an ovary (more on that later). Five weeks after that I really went downhill. My breastmilk started to disappear. I was admitted twice to hospital for clotting and had several blood transfusions. The pain was intense and I was pretty well bedridden.

I started chemotherapy when my son was about 5 weeks old. I was an outpatient for most of my seven weeks of chemo radiation. I only ended up having to have five lots of chemo due to the fact that my body responded well to it, but I also had to have 25 radiotherapy treatments. There is a lot I don’t remember about this time, which is sad in terms of not remembering much in relation to my son. It was a very difficult time and I really just wanted to disappear; I didn’t even want to be in any photos with my son. I didn’t want the memories to be captured when they were full of such sadness. I wanted to forget. I also had to have brachytherapy following the chemo and radiation. This was what knocked it on the head. Brachytherapy, although terribly invasive and confronting, got me over the line.

Even though we live in the A.C.T, I had all my treatment in Sydney. That was great in the sense that my parents live there and we were able to stay with them and they helped looked after our son. We were really fortunate to have their support, especially on my chemo days. We ended up living with my parents for five months.

I went back to work as a teacher about 12 months post treatment and am now in remission. I am currently waiting on some cytology results and will have a pet scan in February. I am expecting this to be clear. I have been lucky in terms of avoiding some of the ongoing side effects that other women suffer. In saying that, the early onset menopause made me feel old before my time in terms of lagging energy levels and I still seem to have much less energy than I did before. I try to regularly rest and recuperate to combat this. Brachytherapy also shortened and narrowed my.. let’s say… birthing canal, but seeing as I wouldn’t ever be in that position of having a baby again, it seemed to be a nuisance more than anything else for myself and my husband.

My treatment left my body unable to conceive and carry a child in the future. My doctor took out one of my ovaries before my treatment began, which is now frozen. I would LOVE to get in touch and share stories with someone else who is going through the process of using their cryopreserved ovarian tissue. Keeping the ovary was my last resort at preserving some fertility. Some of the health professionals involved in my treatment were not particularly supportive of this request, as the process of trying to have a baby through this means is still in the experimental phase: five children in Australia and about 130 worldwide have been born using this technology. It’s kind of like what IVF used to be, very experimental.

Sometimes the health professionals are not going to chase you up about things, sometimes you have to fight for it. Even though the removal of my ovary meant extra surgery and more people in the operating room, I didn’t care. Even though it will be hard financially and emotionally to go through the process of trying to have another child, I want nothing more. It’s important to be able to advocate on your own behalf; you have to fight for what is important to you.

I would recommend seeing a cancer counsellor to work things through with. At times I felt like I lost some sense of my identity, that I was “just a cancer patient”. I told the counsellor that I felt like I wasn’t being a mother. It’s important to remember though that once you are well you can again give back to others.

My tip for Australian women in relation to their cervical health: Remember to stand up for what is important to you & be willing to advocate on your own behalf. Reach out and network to find out what others have done to make this time easier. Know you are not alone in this, however isolated you feel, there are hundreds of women knuckling down to beat this right at this very moment and we are here to help you, to be your voice when you feel lost. I would also stress the importance of having a good support network, including counselling.