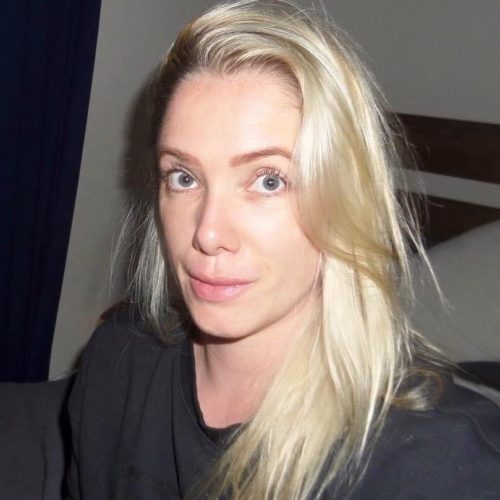 I’m a 41 year old woman who had some unusual discharge (my only symptom) at the end of 2019. I had blood tests, ultrasounds and cervical screenings to confirm what was going on. The tests all came back indicative of cancer. I was then asked to do a colposcopy which I did at the end of March 2020 under GA (plus hysteroscopy and biopsies of any suspiscious areas).

I was told right after surgery that the tumor was biopsied and it was likely cancer. I was shattered. My gut fell into my stomach. Prior to that the gynaecologist surgeon had said she thought cancer was unlikely despite the previous tests – so you can imagine my shock.

Next thing I know I’m seeing a gynaecologist oncologist and being subjected to MRI and PET scans to confirm the location and spread. Less than a week later, I found out I had localised cancer (stage 2A) – just the cervix was affected.

Not long after I was referred to Olivia Newton John Cancer centre for radiotherapy (25 sessions) and chemotherapy on the same site at Mercy (5 sessions) plus 3 rounds of brachytherapy. I thought this was aggressive treatment for my stage but apparently it’s standard guidelines protocol.

At first I was keen to get started as I was fearful that it was an aggressive type of cancer and prolonging would risk further spread. It was 2 weeks after I spoke to the doctor at ONJ that I started my planning and treatment. The first week hit me like a brick and I had all the side effects known to man. I honestly didn’t think I could continue or make it because it was so bad. I had heartburn, a bloated belly, constipation, nausea and menopause symptoms such as sweat, dehydration and pelvic pain to name a few. I asked the staff for medication to help manage things and thankfully it helped me get through the rest of the radio and chemo! The staff at ONJ were wonderful and made it all possible – I wouldn’t be here without their on-going support.

I now face the last hurdle and wanted to share my thoughts on that too. I have 3 lots of brachy to do in mid to late June and I’m scared as hell. It causes me to lose sleep and I have bad anxiety. I’m frightened it’ll hurt – I’m not great with pain. I’ve talked to a few of the ONJ nurses and they shared how it all goes down from the start to the end of the process which has comforted me. I started a personal Facebook group which has been full of additional support of my family and friends. It’s given me the courage and determination to kick cancers butt! It’s turned my fear into more rational, logical and positive thinking.

I think that sort of support is key to gruelling and aggressive treatment process. Without it I’d be a mess before brachy.

Part two of my brachy story is yet to be told but I hope the first part of my story resonates with some women.

Based on my personal experience I would definitely get regular cervical screenings and I would look into getting the HPV vaccine….something I’m considering after I complete treatment.