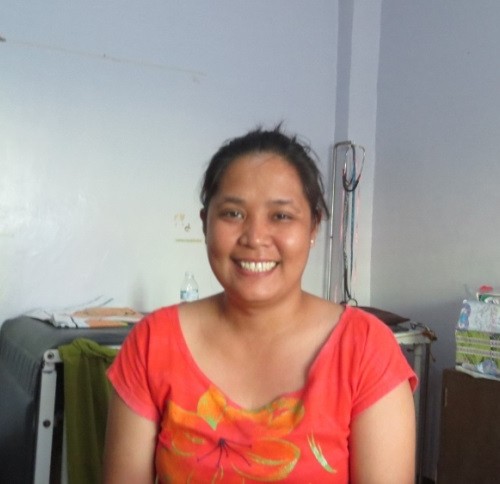 I am 31 and I live in Catarman, Northern Samar in the Philippines. I am a merchandiser for Jimm’s Coffee and I have one son aged 10. I was recently given the opportunity to be screened for cervical cancer by attending an ACCF screening clinic. Prior to attending the clinic, I had no idea about cervical cancer. I tested positive to an abnormal screening and was given treatment called cryotherapy. I was concerned about why I had tested positive and felt a sense of shame as HPV and cervical cancer is not openly discussed in our community.

The clinic staff explained at length that the Human Papilloma Virus that caused nearly all cervical cancer was extremely common and four out of every five women and men would be exposed to the virus at some stage. They told me that in most cases the body’s immune system would remove the virus, but in a small number of cases it failed to do so. They said the virus made no distinction between rich and poor, although some social factors, such as smoking and drinking, could weaken the immune system.

Because the virus was so common and could affect any woman, they emphasised that I should not feel any sense of shame. Rather I should be happy that the changes in my cervix had been detected early so that I could be easily treated. They said I should consider myself lucky as there were probably many women who did not have access to screening and may develop advanced stages of cancer.

The health workers also emphasised to me that it was important to follow the doctor’s advice on following up on check-ups to ensure my cryotherapy had been totally successful and that I suffered no side effects. They told me to go like my name, Joy, and be happy that the screening had caught changes early and spared me the likelihood of developing extremely painful and difficult to treat cervical cancer.