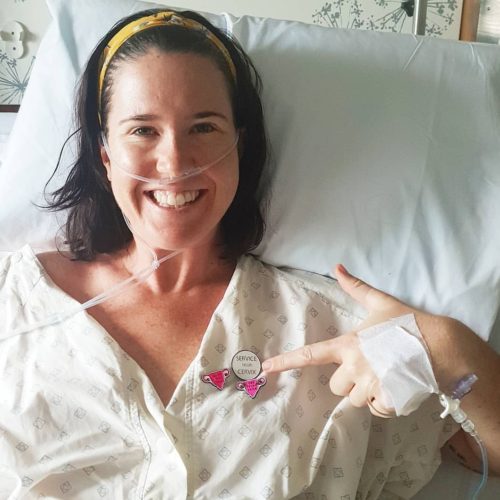 I feel a bit silly writing ‘my story’ because I’m still smack bang in the middle of living it.

My wife and I met while we were training to become police officers in 2011. We got married in February 2018 and we were one of the first gay couples in NSW to get married under the new same sex marriage laws. It was the best day of my life and I was excited for us to start a family. I told my wife that I just wanted a year after our wedding to travel and to set ourselves up financially for IVF. To help with this, we took work in a rural town in central NSW, far far away from our families and support networks.

A year almost to the day of our wedding we began our IVF journey with us both getting routine pap smears from our chosen gynaecologist. We were both about twelve months overdue but neither of us had ever had any gynaecological issues so I had no concerns.

My Cervical Screening Test came back with abnormal cells and I required a biopsy. I had heard this story so many times from friends and other women so I convinced myself that I would be fine. It was on the 2nd of April 2019 that my doctor contacted us via Skype (because her office is about six hours from our home) and had to deliver the news that the biopsy had come back positive for cervical cancer.

The thing that no one tells you about cancer is all the waiting around you have to do. Waiting for answers. Waiting for results. Waiting for appointments and phone calls. Those first five days between being diagnosed and being able to speak to a specialist were a bleak hell. My mum flew to us on the first flight out and together, the three of us drove the six hours to Brisbane to meet with my oncologist; an amazing no-nonsense woman who has wanted the best for me since our first meeting.

After a PET scan and MRI showed that the cancer was confined to my cervix and graded as a 1B1, I was told I was a candidate for a radical trachalectomy which, in theory, would still allow me to try and carry a pregnancy in the future. The surgery was scheduled for 9th of May and I went home to wait some more.

The three hour open surgery removed my cervix plus six lymph nodes and left me with an eight inch abdominal incision. The week after the surgery was a haze of pain, bad hospital food and those hellish physiotherapy sessions. Amongst all of that, my oncologist delivered the news that despite what was shown on the PET and MRI scans, the cancer had spread to one of my lymph nodes. I now needed radiotherapy and would not ever be able to have a baby.

It was yet another blow and I felt that loss as hard as the original diagnosis. I had always wanted to be pregnant and feel that connection with my baby. Knowing I would never get the chance to experience that…well it crushes me even now.

We were given the chance to complete one round of IVF before my radiotherapy. I have just completed a two week course of needles and will have surgery in two days to remove some follicles with the hopes of turning them into embryos. Because of everything my body has been through, it’s not responding as well to the IVF hormones as we had hoped. We will be lucky to get one or two embryos from this whole process.

I’m due to start radiotherapy at the beginning of July. Like I said, I’m in the midst of this roller coaster and my story is definitely not over yet. Right at the beginning of this process, I made a decision to be very open about what I was going through. I talk about it on my social media and have done podcasts and interviews. I have had over 100 women contact me and say that they’ve been for their overdue pap smears because of what I’ve been through. I guess that eight inch abdominal incision was enough to scare them into action.

I feel like a bit of a fraud offering advice for other women who’ve been diagnosed with cervical cancer because I’m still so scared and sad myself, but I can say that reaching out, speaking out and knowing that I’m helping other women or stopping someone from having to go through what I have, has made my pain a little easier to bear.

Don’t do what I did, stay up to date with your screenings and know your normal. If something doesn’t feel right, talk to your GP, your gynaecologist, your friends. Don’t stop talking until you get an answer you’re happy with. Check in with your friends and make sure they’re up to date with their cervical screening too. Look after yourself and each other.