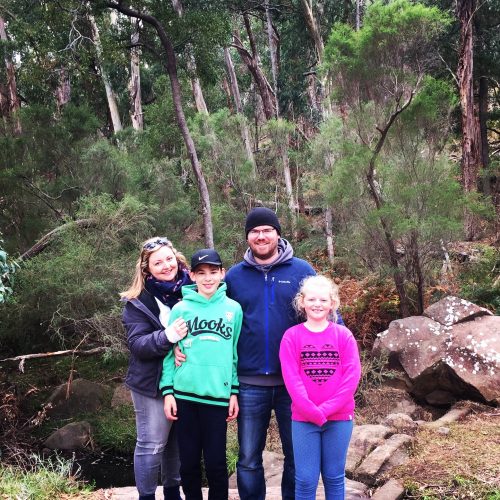 It was November 2015 and I finally made myself an appointment to get my Pap test which I knew I was a bit overdue. As it turned out it was more than a bit – it was 3 years since my last one. Being a working mother of two I had put it off and time got away from me.

A week after my Pap test my doctor rang and I went back in to be told I had high grade abnormalities.

Two weeks after I was referred to my local hospital to get a colposcopy. It was very unpleasant and emotional. The gynaecologist found it hard to get a good biopsy sample so it was a long and uncomfortable process.

My results from that were inconclusive, so I was then booked in to get a cone biopsy of the cervix. After my day surgery I was told to come back in six weeks unless I got a phone call. Well I was feeling quite confident at two weeks and six days as I hadn’t heard anything yet. Of course I got ‘the call’ right at the three week mark. It was cervical cancer. Stage 1b. Adencarcinoma of the cervix to be exact.

I was referred to the Mercy Women’s Hospital in Melbourne for further treatment. Basically I didn’t have an option. I needed a radical hysterectomy. The nature of my cancer was different from the ‘normal’ cervical cancer. My cancerous cells were glandular. Which means instead of growing out they could ‘jump’ to other parts of my reproductive organs. It all needed to go.

Thankfully I was done having children. I have a beautiful son and daughter and it was a (relatively) easy decision to make.

Four weeks after my first consultation I was booked in for surgery. Because of my age I chose to keep my ovaries. I was told that the risk of the cancer coming back to my ovaries was very low. As well as my cervix, my uterus, Fallopian tubes and surrounding tissues, and the lymph nodes in my groin were removed too.

I spent a week in hospital two hours away from home. My wonderful husband stayed close by and caught a train every morning and waited with me all day, before taking a train back late that night.

It’s been nearly a year since my surgery. Not a day goes by that I’m not grateful for the medical staff that helped me. I still go to Melbourne every three months for my check ups. My recovery has been quite good physically, although I can sometimes still get quite emotional.

I had no symptoms. I had no pain. It was purely the Pap test that potentially saved my life.

Get your Pap test! The alternative is so much more painful than a few minutes of being uncomfortable.