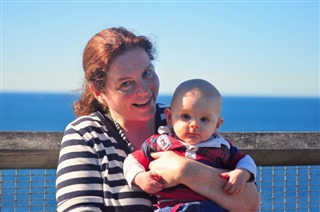 As I hold my little boy in my arms, I never forget how incredibly lucky I am to have him, and what a miracle little boy he is. I know that’s a cliche as all babies are miracles, but Elliott is the amazing result of a team of doctors who worked tirelessly to give me my dream. I hope my story can give ladies facing cervical cancer treatment real hope.

My journey started in around 2009/10 when we decided it was time to start trying for a child. After a year I got a bit worried, then another year of increasing heartbreak and stress, we decided it was time to move to IVF. As part of the IVF preparation I was advised to get a range of tests, including my Pap test as it was due. Then followed the experience that many women have had – one bad test result after another. Then the devastating conversation with a slightly shell-shocked doctor who confirmed they had found cancer. My first thought was ‘will this delay the IVF?’ before the reality sunk in. Talk of a hysterectomy replaced talk of IVF, and what followed were the very worst, darkest days of my life.

Those days were the worst and my heart breaks when I hear of people being diagnosed, as that is when you are most afraid and you know the least. The doctors give so much information and your family and friends want to know what’s next, but you really don’t know. The diagnosis phase is so hard when the range of outcomes are so wide but naturally you want certainty. It took a while, but I did learn to go with the flow eventually and just accept that the lack of certainty was because the doctors were trying to work out the best strategy.

After the next round of scans it was determined that I was only stage 1B1 and would be eligible for fertility sparing surgery, called a trachelectomy. I underwent a round of IVF before any further surgeries and managed to get 9 embryos into the freezer. The next step was to remove some lymph nodes, which thankfully came back clear, and I had the trachelectomy in Feb 2013.

I focused on recovery but I was keen to continue with trying to have a baby, as I was getting older and that pesky cancer had derailed things for too long already! I started another round of fresh IVF (leaving my frozen insurance embryos alone), but it failed as the scar tissue from the trachelectomy prevented the embryos being returned. More dark days then too. I then had two small operations to fix that, then another round of IVF in Jan 2014 and it worked.

The IVF worked! Remembering the moment I saw the second line appear on the pregnancy test after 4 years of so much pain and heartache still brings tears to my eyes. After the operations, the long nights, the fear and sadness, it was simply amazing. The pregnancy was risky and I had an operation at 12 weeks to try to hold the baby in place. With no cervix there was a very high risk of extremely premature birth. At 22 weeks the water sac started to bulge, and I was put on bedrest. Amazingly I made it to 33 weeks, when my waters ruptured, and my tiny beautiful little boy was born by caesarean on 25 August 2014, weighing 4lbs 10oz.

The birth was the opposite of what some people seem to dream of. It was a caesarean (there’s no chance of natural birth without a cervix), and he was thankfully breathing but after a quick kiss he was taken away from me due to an infection.

I was quite ill and didn’t see him for 12 hours, and by then he was under blue lights for severe jaundice, but I didn’t care about any of that. He was here, he was safe, nothing else mattered. After they took him from me and as I was being stitched I remember repeating over and over to the anaesthetist ‘He’s so tiny! He’s so beautiful!” until she upped the drugs to put me to sleep!

I love being a mum. I should admit there are hard bits and I’m chronically tired, but to be honest none of that really bothers me – part of me loves the ‘mum’ness of it all! I know these early days will be brief and he is already not my little baby, so I try to just enjoy it.

In many ways I think having had cancer makes me a better mum, in fact – a better person. I’m more empathetic, I’m stronger in many ways and don’t let the little things stress me out. Cancer showed me what was important in life and other people’s opinions turned out to be very unimportant. It also made me grateful for what I have, for my family and friends, and as a result I have returned home to Australia after almost 10 years in the UK.

I am also aware that I was incredibly lucky. I had a small cancer, which was treatable with only surgery and I didn’t suffer too many complications. My care was excellent, from the nurse who took my Pap test to the consultant cancer surgeon, the IVF team, the doctor who placed my TAC, the obstetrics teams and paediatricians and many many more people who were involved. Everyone involved was caring and wanted only the very best for me and my family.

Please note- this story was originally published on the Macmillon Cancer Support site. It has been republished here with permission from the author.