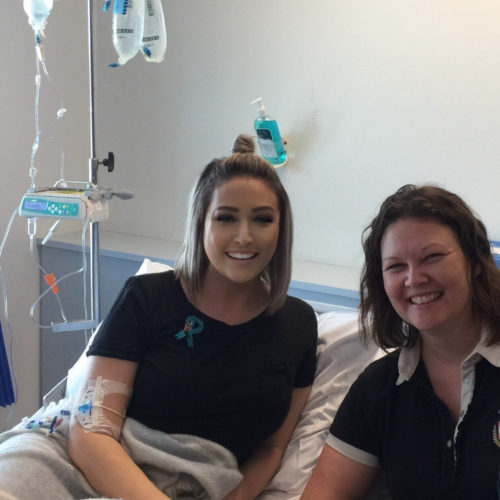 My cervical cancer journey began in December 2018 with my first symptom –  to say it was terrifying would be an understatement.

After visiting my doctor several times with this non-stop symptom I was sent for ultrasounds which came back clear. At first it was all put down to me coming off a contraceptive, but my doctor said something was being missed and sent me to see a gynaecologist (little did I know that this was the day my doctor saved my life).

I saw the gynaecologist and had a cervical screening done. Within four days I was called into my doctors office and told the that I had abnormal cells and HPV 16. I was then referred to a specialist at the hospital and he conducted a thorough examination and a colposcopy. When he saw what looked like a lesion he took biopsies and told me to come back in two weeks.

However within three days I was called by the specialist and asked to come back in. I was told that the cells were at a critical stage and that he would like to operate and conduct a LLETZ and a D&C. I was put on the emergency standby list but after just two hours of leaving my appointment I was called again and told there had been a cancellation and I was booked in for surgery in two days.

At this point I had already self diagnosed myself, I knew deep down that I had cervical cancer. I went in for surgery and what should have been something fairly routine ended up taking a little longer than expected.

I woke up with nine faces around my bed. I was told that they had cut out what ended up being stage 1 cancer from the bottom of my cervix. I was then told that they had found something they weren’t expecting which was stage 1b3 inoperable tumour that took up the entire cervix and started to go into my uterus. My first question was if I was going to die – which the reply was no. My second question was could I have children – and again the reply was no. My heart broke.

I regret not staying up to date with my cervical screenings and urge others to keep up to date with theirs. If something even slightly feels off go and see your GP. Mine saved my life.

Stay up to date with your screenings, be aware of any changes and don’t ignore the symptoms. Get a second opinion if you feel like something is being missed.