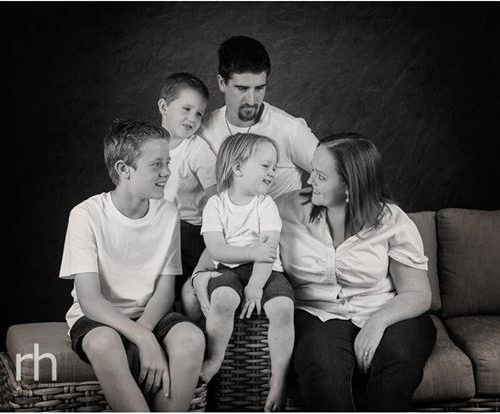 Kelly had always been a fighter.

At just six weeks old she was made a ward of the state. Later, she became a single mother.
Kelly fought to clean her life up, inspired to be a strong role model for her son, and then Kelly met Aaron.

The love of her life, Aaron became a father to her son and a dedicated, loving partner. After battling through several miscarriages to create another two beautiful children- and despite struggling to stay afloat after Aaron was made redundant- Kelly felt like she’d finally reached her own happily-ever-after, describing their life together as “perfection”.

Then, in late September, Kelly found a lump in her pelvis.

By mid-October, Kelly and Aaron were advised it was cancerous.

And by the end of October, they’d discovered that Kelly not only had incurable stage 4b cervical cancer but that it had spread to her left lung and her pelvic bone.

As mothers, we have each stroked the faces of our sleeping children and dreamed of the lives they have ahead. We imagine ourselves waving them off on their first dates, wishing them luck on their first days of uni, dancing with them on their wedding days. We ask ourselves, “What will my child be when they grow up?” but we never dare imagine we may not live to find out.

Aaron took a leave of absence to care full-time for Kelly and their children. He shouldered the burden of knowing that someday soon he would be the sole carer for their children, the youngest just 16 months old.

Kelly underwent palliative radiation treatment to ease her symptoms so she could enjoy the remaining time with her family. Kelly did what Kelly has always done: Fight.
Fight to keep her family afloat.
Fight to stay positive for her kids.
Fight to wring every last drop of love and joy from these, her final days.

Kelly passed away in February 2018, just shy of her 34th birthday, leaving behind Aaron & their three young boys.

Kelly was a devoted wife & a loving mother who was passionate about trying to ensure other women did not go through what she did. This passion was evident in Kelly’s blog, where she spread awareness regarding the importance of cervical screening. Rest in peace Kelly X

“ARE YOU DUE OR OVER DUE FOR CERVICAL SCREENING!!!! BOOK YOUR APPOINTMENT TOMORROW WHEN YOU WAKE UP!!!
Believe me 5 mins of discomfort is much better than battling Cervical cancer!! It’s not worth the risk & it’s not a battle I would wish anyone to have to fight!!!”