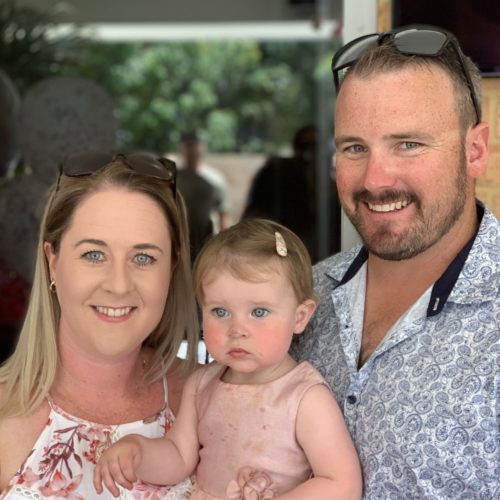 It is hard to know where to start. In 2015 I was 27 and getting married to my best friend of ten years – six months later it was an entirely different story.

It all started with me getting a staph infection along my knicker line. I went to my GP and there was a swab test taken/Pap smear. The tests showed there was abnormal cells & I was referred on to a gynaecologist.

After having biopsy tests I underwent a LOOP procedure to remove the cells and was then referred to an oncologist located two hours away. After seeing them I had a cone biopsy to remove more of the cervix. He was confident it was all removed but would call in about a week. I knew in my body that something wasn’t right.

Two days passed and my husband and I were called to Perth. I remember getting the phone call at work to say I had Stage 2 cervical cancer and needed to come back to see him immediately.

I travelled two hours to see him after which I was given two options.

I looked at my husband and just balled. We had to make a decision there and then so we chose option two. Trying to face the facts I could never carry a child got me so depressed – nothing anyone could say was going to make it better.

The day of surgery was just such a blur. Recovery was extremely difficult, especially being so far away from my family and friends. Since that day I have had testing done every six months, and I’m coming up to five years this November.

All of the above happened in just three months so I really am grateful to be here and be alive. Whilst the cancer took away my chances of having children it never stopped me from being determined to be a mum. In December 2018, through the generosity of a beautiful surrogate, my angel daughter arrived. I thank my lucky stars every single day that it was still possible to have children with my own eggs.

Dont hold back on getting any tests done. You know your body better than anyone else.