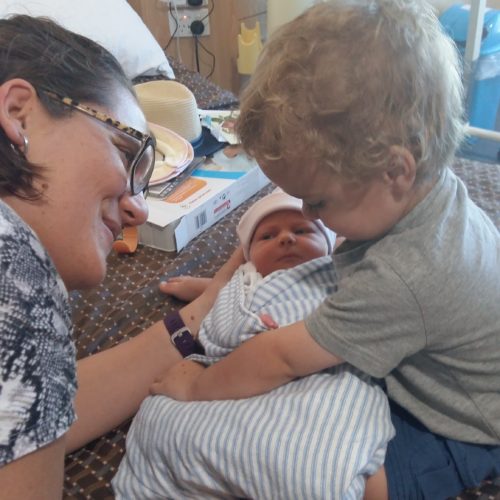 I was a regular, 2 yearly Pap smear kind of girl. It was always in my diary because about 10 years ago I had an irregular one. It turned out to be nothing but scared me sh*tless at the time!

I’d had the free vaccinations in my mid 20’s and so wasn’t ever worried about the results. I had no idea about HPV and its link to cervical cancer or even abnormal cell changes.

When I went to my post natal 6 week obgyn appointment after I’d had my first child, a son, my OB offered me a pap but it wasn’t due until September and I felt so gross and hot that day (mid March heat wave), my newborn was crying and so I declined and said I’d go to my GP in September when it was due. I often wonder how different my story may have been if I’d just up skirted that hot, sweaty day.

So, come September, I booked my pap with my GP. I was also really tired so she ran a whole pile of bloods and we speculated it was my low iron levels making me so exhausted,  combined with new mumhood. Other than tired, I’d had not a single symptom that would point to anything been wrong, let alone ‘The Big C’

Two days later I got a phone call from the nurse to come in asap to discuss my results with the doctor. I was glad as we were due to fly over east for a holiday and my GP was keen to get me started on the iron supplements we thought I needed, before I went away.

As soon as I walked in that afternoon I knew something was off. She ushered me in, sat me down, made eye contact, with tears in hers and said those dreaded words ‘I’m so sorry to tell you this. ..’

God knows how we both got through that appointment but she did manage to get me into the best gynecological oncologist in WA, asap. Between my 10 days in Qld and the 5 day wait at home my husband and I were a flip flopping between a fog, panic and floods of tears. The ‘not knowing’ was something we found so hard to deal with. Other than our immediate family we hadn’t told anyone. I wanted to tell people when I had a full understanding of what was going to happen.

Finally the day of meeting the Dr arrived and to be honest, I nearly vomited about 400 times. He went through all the possibilities and then I had my first, of what now feels like a million, internal examinations. I was also sent for a PET scan (where you are injected with a radioactive dye) and MRI. After all the tests and another agonising 2 week wait, in late October 2014, I had a cold knife cone biopsy that removed the visible lesions and was staged with 1A1 Adenocarcinoma in situ cervical cancer. They found 2 small lesions and there was no spread but the pathology came back and the margins were very slim and my Dr wasn’t comfortable leaving it at that.

It was then that my ability to have more children came into question. The text book treatment for a 1A1 diagnosis is a total hysterectomy, as soon as possible but this would obviously mean no more children and my Dr, along with hubby and I, were very keen to keep my fertility so we could complete our family, the way we wanted. So we chose to have another cone biopsy in December to make the initial margins larger and then keep a very close eye on everything.

At my first 3 month check up everything was clear and although a little sooner than we had planned, we were given the ok to try and fall pregnant. It was daunting as it had taken a long time for me to fall pregnant with #1 and so we expected #2 to be a similar story.

Turns out, not so much! At my next appointment 6 months later, 9 months after my cone biopsies, with a cervical suture in place to keep my cervix closed, I surprised my gyne/onc by telling him I was 16 weeks pregnant! What was left of my cervix was closely monitored throughout my pregnancy but it held up well and in February 2016 our beautiful, healthy daughter was born!

In December 2016, with my little family complete, I booked in and had a radical hysterectomy. I am currently on yearly checks, called vault smears, where they check for cell changes in the vaginal walls. This will continue for at least 10 years but potentially, the rest of my life.

Luckily, I was able to retain my ovaries and so my life has been able to go on in a similar style. I have no long lasting effects from treatment, only have tiny scars near my c-section incision and still have the ‘joy’ of crazy hormones every month!

Like all people affected by cancer, I am eagerly awaiting the 5 year post treatment marker. For me, it will mark not only survival but also a return to normality. For the first time in 5 years I’ll be allowed to donate blood again, something I regularly did pre-diagnosis and miss doing often.

So, that is where you will find me on October 19th 2019, celebrating my life that was saved by a pap smear, having the opportunity to save someone else’s life with my healthy, cancer free body!!