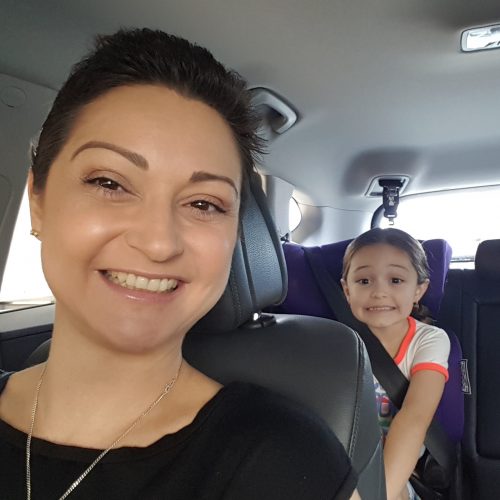 In April 2015 I went to my GP for my normal Pap test check up. My GP saw a lump straight away.

A week later I was diagnosed with stage 3 cervical cancer. I fell apart as all I could think about was my baby girl and not knowing if I was going to be here for her. I had no symptoms at all. I had CT scans and MRI’s to see if the cancer had spread, to my relief it hadn’t but I knew I still had another road to go down.

On the 2nd June 2015, I went into surgery to have an full hysterectomy and also my lymphoedema’s removed. My recovery went very well and I was back to work after 4 weeks. I had my 8 week check up, all was fine; another one 8 weeks following, all clear.

Late December early January 2016 I was getting lower back pain but didn’t think much of it. I ended up having 2 cortisone injections but they did not help. I was sent to see a joint specialist and was told that I had arthritis and not much can be done. The pain was getting worse and I was taking up to 10 painkillers a day just to get through work and looking after my daughter. This was going on for about 6 months before I finally had enough. I went back to my GP and said I want a scan to be done, that same day I had the scan. The following week I found out that I had cancer again, it was my gut feeling that it had returned.

I handled it better this time round. I knew I had to fight again for my girl but this time I was in for a longer battle. End of September 2016, I went for surgery to remove as much as possible. The cancer was attached to my bowel. Two weeks later I went and had my first round of chemotherapy, it was the longest 12 hours of my life, I cried through most of it. Two weeks after I lost all my hair and then I started my 7 weeks of chemotherapy/radiation therapy treatments. It was such an emotional roller coaster ride. At one point I wanted to give up but my girl gave me the strength I needed and I kept fighting. Once treatment had finished I went back to work to keep my mind busy. My scan appointment finally arrived to see if treatment had worked and it did, the results came back clear.

I am cancer free, I couldn’t stop crying and it took a week for it to sink in. I couldn’t have done this without the support from my family and most of all my little rock, my girl. No matter how hard and tough it gets you have to keep fighting, there’s always a light at the end.

You know your body and when something isn’t right get it checked and listen to your gut feeling as it’s always right.

Get check ups regularly and don’t delay. Check ups should be every year as 2 years seems too long.