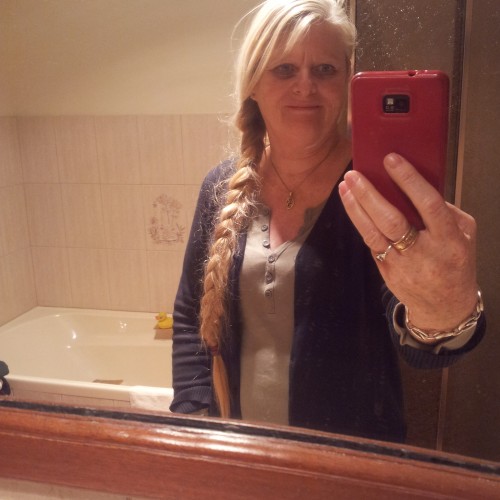 Nearly two years ago on the 20th of November 2013 (my sister’s birthday) I was told that I have cervical cancer.

Being a woman in the menopause age bracket (lucky me) I put off going to the doctor with symptoms of bleeding after sex, horrendously heavy periods, spotting continuously for months, back pain and leg pain. I put all the symptoms down to going through menopause, until I went to my GP and complained about it.

I hadn’t had a Pap test for over ten years. The nurse rang me a week after my Pap test and said I had to see the doctor today as my results “weren’t good actually” (her exact words).

I was in panic mode, but at 1 pm that day I sat with my husband and 2 year old grandson who was staying with us at that time as the doctor said that I had cervical cancer. I laughed, my first reaction, then tears sprang to my eyes.

We left with a referral to a gynaecological oncology appointment. I first thought that I’d have a hysterectomy before Christmas and then it’d all be over and I could relax.

Was I wrong? Firstly I didn’t get an appointment to see the gynaecologist until December 23rd, as I am a public patient. He did a colposcopy (like a Pap test) where they look at the cervix through a microscope, take a biopsy and then you have to wait for the results.

All of a sudden the words cancer and oncology were words that I had to add to my vocabulary. Christmas for my family was a non-event, no-one smiled and it impacted everyone.

7th of January 2014, I had a cone biopsy operation and had a set back after the operation so I had to stay overnight. I then had to wait a week for results and in the meantime had a CT scan.

January 15th I got a phone call saying that the results had unclear margins, so I would need a hysterectomy. I was shopping with my daughter at the time and just burst into tears standing on the sidewalk. Another appointment was made, and before my operation another visual check of my cervix and pap smear was performed.

My hysterectomy was performed on March 13th with robotic assistance. Wow, when I walked into theatre and saw this huge mechanical thing with the nurses putting his arms on him I was amazed, frightened and panicky.

I got the results from my hysterectomy and they had clear margins. Yay, my family could smile.

10th November was my next check-up after my hysterectomy, and I had a vault smear test done. The doctor did see an area that they took a biopsy from, so I was back to waiting for test results again.

I received the letter in the post saying I had high grade pre-cancer VIN 3. I was so disappointed, as nearly exactly a year later I was back in limbo again. That’s how I felt. Pre-cancer, no one could tell me if it would change to cancer and how long, was it in a months time or maybe a nanosecond away?

Christmas came and went and no one smiled again. We weren’t morbid or anything, just no one felt like celebrating.

17th February 2015 was booked in for my next surgery. This time the doctors decided to do laser surgery on my vagina to remove the precancerous cells. Another wait for results ensued. I got the clear margins again and was back to 3 monthly check ups and test which meant a smear test or colposcopy every time I went to the gynaecologist. The results came back clear margins.

3 months later, they did a colposcopy and more suspect lesions were visible; a biopsy was taken and came back as high grade pre-cancer VIN 3 again. My tests were sent to the tumour board at the hospital and they discussed and agreed to do another operation, this time they would take away 3 cm from the top of my vagina.

I have been down this road before, so if the next three month check-up shows all clear then I will breathe a sigh of relief and think that maybe we are winning this. But until then, I can’t. I haven’t been given the all clear, I have been told I’m NED (no evidence of disease). MY next appointment is Jan 2016, another Christmas to go.

Most people after a hysterectomy get the all clear and it’s fine. Unfortunately not in my case.

We are from the country and we live 3 hours away from my treating hospital and gynaecological specialists, so it takes a lot out of us, not just in time but money and getting there.

In these two last years I have had more Pap tests and colposcopies than if I had done the right thing and gone for my Pap test every two years.

I would say one thing for the older ladies out there, don’t presume that your symptom’s may be just menopause. Go to your doctor and get yourself checked, it could just save you.