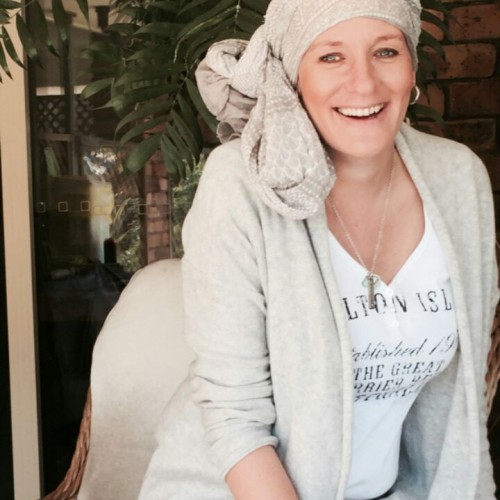 My beautiful wife Chrissy was first diagnosed with cervical cancer in January 2014 when she was 40 years old. It came as a huge shock, especially as only 6 months earlier she had given a caesarean birth to our little daughter Mia. The caesarean was necessary as Chrissy’s cervix had failed to dilate.

Mia was conceived via artificial insemination through an IVF clinic and as such she endured many tests including ultrasounds, dye injections and physical examinations. She had also had regular Pap tests throughout her adult life.

She had suffered cramping and spot bleeding since the birth and sex was too painful and impossible, but this wasn’t too abnormal post birth. When we had to rush to the ER twice in a week due to heavy bleeding, we seeked out our gynaecologist for further investigation. One hour into a “10 minute” procedure we knew something was seriously wrong. Then a referral to a gynaecological oncologist confirmed our worst fears. My beautiful wife and first time mum had a tumour (2b) on her cervix and a lymph node in her groin was also involved.

As they were too far advanced for a surgical cure, our best chance was 6 weeks of daily radiation and weekly chemotherapy. She then had a weekend of brachytherapy. I am in awe of her inner strength and determination at what she is enduring to beat this horrible disease. It all seemed worth it when in September 2014 she was given the all clear. Sadly that didn’t last for long.

In December 2014, after yet another PET scan and physical examination, it was confirmed that her tumour was active again and worse still it had metastasised into lymph nodes in her chest. It is now deemed inoperable and incurable. I’ve never felt so helpless in all my life. That day will haunt me forever.

12 months on and my brave wife continues to battle. Chemotherapy every third week. A mixture of toxic drugs that take a week to get over. She regains enough strength just in time to repeat the process again. This is our life. It is time consuming, it’s an emotional roller coaster, it’s very expensive (as avastin is not available on the PBS for cervical cancer), it makes her weak and it has taken all her hair.

My wife has amazing inner strength. She is an inspiration to me and many others. In time we know it will take her life and I will lose my wife. My young daughter will lose her mother and my sons will lose their step-mother. Christine will keep fighting as she is too stubborn to give in. She has already survived longer then predicted and her health is still okay. To me, she is the most beautiful woman in the world.

Trust your inner voice when it comes to your body and find enjoyment in every day.