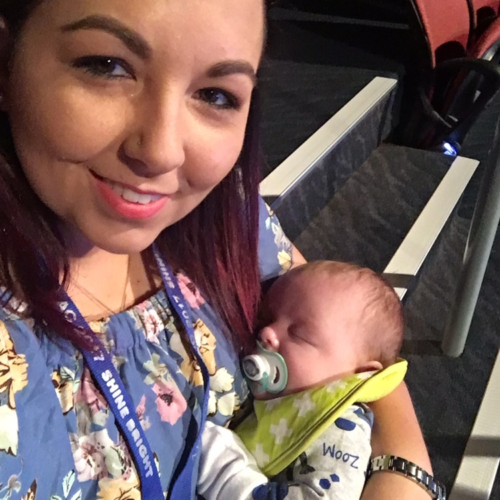 I was fully vaccinated against HPV & was up to date with my cervical screening. However I was diagnosed in 2014 with stage 2b cervical cancer. Just like my mum, I had always experienced blood clots & heavy periods. One day I woke up to something on my sanitary pad that looked like a sac. Was it a miscarriage? I had been with my partner a long time but was on the pill. I went to the doctor with the “sac” that I had expelled. After examination, I was told that I had suffered a miscarriage. I was devastated. They did some tests & they all came back clear, I didn’t have a miscarriage at all, my uterus had just shed the lining all at once. I decided I wanted to go off the pill anyway (I had been on it for 10 years) & try for a baby. My GP sent me to have an ultrasound just to be safe & they found a 7cm mass on my cervix. So my GP sent me to a gynaecologist for a dilation & curettage (D & C) and to remove the mass, which I was told was probably a fibroid. At the follow up appointment my gynaecologist informed me that in fact I had cervical cancer.

I was referred to a hospital on the Gold Coast. When I asked about the possibility of having a child following treatment, my specialist told me my chances were very highly unlikely. This was devastating to hear as I was only 28 and had no children, however once I told him it was important to me to at least try, he referred me to an IVF clinic, where I had my eggs harvested and with my partner’s sperm we had embryos frozen. My doctor & my partner really just wanted me to start my treatment ASAP but I was willing to delay my treatment by three weeks in order to do this. They harvested 12 embryos & froze 9. Through my cancer journey I found out I had polycystic ovaries so even if I hadn’t had cancer, I was told that becoming a mum would have been difficult for me regardless.

My doctors had me on a high dose of radiotherapy and chemotherapy. I had radiation every day for five weeks & chemotherapy once a week for five weeks. I was so sick for the first three weeks & ended up losing 10kg in a week because I couldn’t eat or drink, not even water. I wasn’t sleeping due to pain in my lower back & left leg. My partner had to sleep in the spare room as it was too disturbing for him to sleep next to me when he needed to get enough sleep so he could function at work each day. In the end I was dosed up on 5 different pain killers so I ended up sleeping all day. I had to record info about what meds I was taking & what time so that I wouldn’t end up accidentally overdosing. I just felt so dopey & out of it, plus I had chemo brain (yes it’s a real thing!).

Luckily by week three my nausea stopped & I started to feel more normal. Icy poles were my life saviour, some days it was the only thing I could stomach. Getting cannulas put in was horrendous, I needed heat packs to dilate my veins. Those chemo nurses know what they are doing!

I finished treatment early December & had an MRI scan at the end of March. I felt back to normal by then. I ended up having about five months off from my work in retail. I did try to go back sooner but I felt really tired and just couldn’t cope. Luckily my work was really understanding about everything.

Unfortunately I now have medically induced menopause, due to my ovaries getting damaged from the treatment and have a lot of issues with trying to lose weight. But I have to constantly remind myself that my body has been through a lot and I have to take one day at a time.

In April 2015 I received a call to say that the treatment worked and that I was clear of all the cancer. After that I started on my quest to become a mum. I asked my doctor what my chances were of having a baby but was told there was no chance due to the effects of the radiation. In fact, the quote was that I was like a “dried up prune”. (I did find this reference quite funny). I was devastated but I always knew this was a possibility. My best friend who I have known for more than 20 years offered to carry a baby for me & my partner using one of our stored embryos. We were so happy for her to have offered this amazing gift to us as she knew how much I have always wanted to be a mum. With this sort of situation the whole process to get to the point of implantation normally takes about 12 months as there needs to be a lot of things to be considered like counselling & the involvement of lawyers. It could have potentially taken even longer in our situation as my friend doesn’t live in the same town. For us though, this amount of time wasn’t an option for me, I was very insistent and kept on top of things very well, hence the process was speedier & an embryo was implanted after about 6 months, on November 4th 2016. We were very lucky & the process worked first go. Our son Jackson was born in July 2017.

I am so happy that I put my foot down about getting my eggs harvested. When I got diagnosed I knew that if I came out the other side after treatment healthy, I would want a child. You have to do what you think is right for you.

My tip for Australian women in relation to their cervical health: If something doesn’t feel right with your body then get yourself checked out. My body told me there was something wrong & if I hadn’t have listened to it, I may not be here.