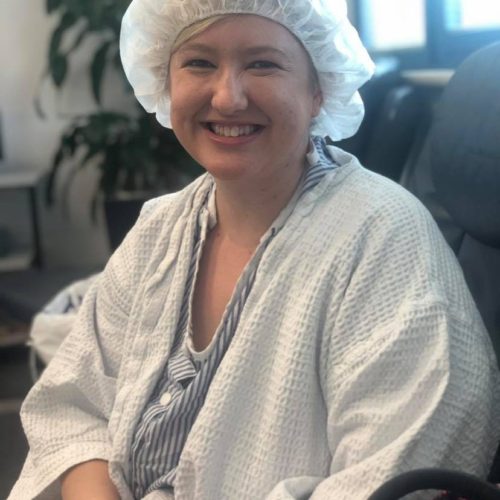 This time last year, some abnormal bleeding in between periods prompted me to book an appointment with my GP. Although I was overdue for my pap smear, I’d had the Gardasil vaccination 10 years earlier and no issues since. So I had the blood test and cervical screening test as ordered by my doctor and tried not to worry.

After spending the October long weekend away with my family, I received my results. Unfortunately, it wasn’t what I’d hoped – irregular/abnormal cells had been detected and were suspected to be CIN3, or high grade pre-cancerous cells. I was referred to an obstetrician for a colposcopy. The results came back as CIN3 again, so I was booked in for surgery to remove the abnormal cells.

On the 29th of October, I had a LLETZ Loop procedure, a hysteroscopy and a D & C. The results came back that same week and revealed I had some SCLL cells and adenocarcinoma in situ or AIS, a precancerous condition that can lead to cervical cancer. As AIS occurs higher up in the cervix, it’s more difficult to diagnose, and the brush or spatula used in a cervical screening test doesn’t always go up that high. Thankfully, I’d had a D & C and hysteroscopy as well as the cervical screening test. Had I just had the LLETZ procedure, the AIS may not have been discovered.

Despite clear margins on one lesion, there was a detached section which wasn’t conclusive, so I was referred to a gynaecologist oncologist. The tumour board reviewed my case and recommended a second surgery. Having just had surgery, I had to wait six weeks for my cervix to heal before a cone biopsy could be carried out where more of my cervix would be removed and tested.

As you can imagine, it was an incredibly stressful and emotional time. We shared the news with a few close family members, including my parents, husband’s family and some close friends. My younger sister was pregnant with her first baby and I didn’t want to worry her, so we chose not to tell her.

A year and a bit later, I’m still experiencing irregular periods with some irregular bleeding, and have a specialist appointment booked to determine what the underlying cause might be. I worry it might be early stage pre-menopause, which I’d find difficult to deal with as I’d love to try for a third baby. It could also be my thyroid or bad cells staging a comeback. However, my six month check-up and cervical screening test in June were both clear, so I’m holding onto that. Hopefully I’ll get some definitive answers soon and will know what the next steps need to be.

For other women going through uncertain times at the moment, or who’ve put off getting a cervical screening test, I am living proof that five minutes of discomfort is well worth the sleepless nights of worrying if AIS or bad cells might return one day. I have a beautiful family and my two boys and husband to live for and am grateful every day that my irregular cells were detected and treated early.

Thankfully, some of my girlfriends had had CIN 1, 2 or 3 and the LLETZ procedure, and two others had also had cancerous cells removed so I was able to reach out to them for support. I’m also enormously grateful for the support of the Australian Cervical Cancer Foundation (ACCF) www.accf.org.au  in my hometown of Brisbane, and their wonderful Facebook support group (Cervical Cancer Australia/NZ Support Group). They also have a range of resources on their website, including stories of women who have been through similar experiences and a downloadable support booklet.

Lastly, I urge you to familiarise yourself with the symptoms of cervical cancer and have regular cervical screening tests. Changes to cervical cells don’t usually cause any symptoms, but vaginal bleeding between periods, after menopause or after sex, pain during sex and unusual vaginal discharge can all signal cervical cancer. If you experience any of these, book an appointment to see your doctor without delay. You can find more information on the ACCF website.