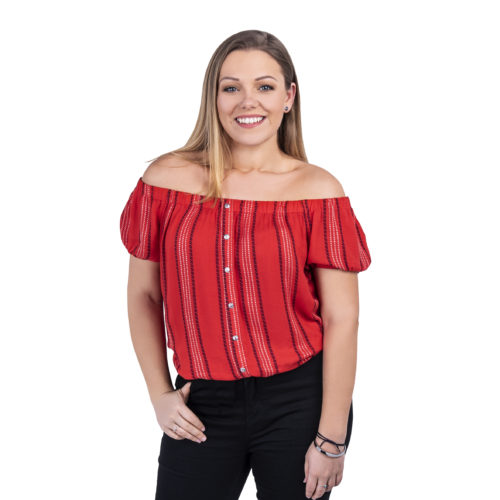 Cervical cancer is something you hear about but hope you never have to deal with. I was very lucky to grow up with a Mum, Zara, who always educated my Sisters and I about our bodies and encouraged us to get regular Pap Tests, now called a Cervical Screening Test.

In 2002 my Sister Jeanette was diagnosed with cervical cancer during a routine Pap test while pregnant. From that moment on I promised myself to never miss a Pap test.

In 2009 I started to notice a few changes in my body. I was run down and losing my voice a lot (which is not ideal as a radio presenter). I went to my GP in Darwin and we started to rule things out, including cervical cancer as I was up to date with my Pap tests and hadn’t had any abnormal results previously.

After a few weeks my doctor suggested that with all my lower abdominal pain it would be a good idea to find a gynaecologist and investigate if I had endometriosis – a condition resulting from the appearance of endometrial tissue outside the uterus and causing pelvic pain. I also suffer from Poly-cystic Ovarian Syndrome; a condition that affects menstrual cycles, hormones, blood vessels and can cause small cysts to form in the ovaries, another reason the Doctor suggested I address my health issues quickly. I resigned from my job at the end of 2009 and flew home to Melbourne to get the ball rolling.

After finding an amazing gynaecologist, it was suggested that I have a laparoscopy – a surgical procedure in which a fibre-optic instrument is inserted through the abdominal wall to view the organs in the abdomen and pelvic region.

In January 2010 I was booked for my operation and gave my doctor permission to remove anything during the procedure should they find anything concerning. The operation went well however, a couple of days after I received a call from gynaecologist saying she wanted to talk to me in person that day and that I should bring someone with me. That was where I learned that I had the early stages of cervical cancer and I was also diagnosed with endometriosis. With Mum Zara by my side, I called my Sister Jeanette who said “…you’re just the first of your girlfriends to get it” and proceeded to rattle off the names of all of her friends who had either had abnormalities or cervical cancer. Through the support from my family and friends and particularly that of my Mum, Sister and all of their friends who had been through a similar journey, I was able to maintain a positive outlook during my treatment.

Over the course of a year I had two laparoscopies, had my cervix removed and had numerous LLETZ/LOOP procedures (Large Loop Excision of the Transformation Zone, where a wire loop through which an electric current is passed at variable power settings). Various shapes and sizes of loop can be used depending on the size and orientation of the lesion. I also had to make some small lifestyle changes after each procedure and operation to reduce my risk of infection, such as not wearing tampons, go swimming in public pools or wear underwear to bed. Thankfully I didn’t require radiotherapy but I did have a cocktail of medications including steroids. It’s funny when I look back on everything and remember what knocked me mentally – and it was the steroids. It was the straw that broke the camel’s back of course but putting on weight and dealing with fluid retention messed with the positive outlook I was trying to maintain.

I was given a 2 ½ year remission period where I had to have Pap tests every 3-6 months as well as blood tests. In December 2012 I got a phone call from my gynaecologist saying that as I had successfully gone through my 2 years with no abnormal results, my remission period had been shortened and I was clear to return to 2 yearly Pap tests.

Cervical cancer is one of the most treatable cancers. People always say they wish there was a cure for cancer and we are so fortunate to have the closest thing to it for cervical cancer. Boys and girls are now able to get the Gardasil® vaccine, which helps protect against the common HPV (Human Papilloma Virus) strains that cause not only cervical cancer in women, but cancers such as penile in men as well as oral and anal in both genders. With this vaccine, as well as regular check-ups, such as a Cervical Screening Test every 5 years for women, you can avoid going through what others have before you.

After my experience I signed up to volunteer with the Australian Cervical Cancer Foundation so I could share my story and raise awareness, as well as encourage others to get behind ACCF on their mission to help women get vaccinated and screened in developing countries where cervical cancer is the leading cancer-related killer of women.

And if you’re reading this about to embark on your own journey through treatment, be sure to talk to your network around you. I learned very quickly just how many people had gone through a similar journey. They were able to offer me a great deal of support and comfort when I needed it most. Keep your head up and make sure you focus on “number 1”, which is you.

– Keep up to date with your Cervical Screening. I know if can be awkward and uncomfortable, but your life is worth protecting. One awkward appointment every 5 years is better than what I went through.

– Don’t smoke. There are many studies which show the link between smoking and cervical cancer.

– Always wear protection to lower your risk of getting HPV.

– Get vaccinated. People ask for a cure and we have the next best thing.