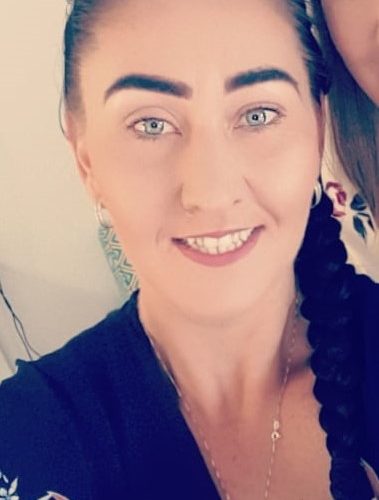 I went for my cervical screening on the 19th February, 2018. Prior to that, I hadn’t been for about 5 years, since having my daughter. The results indicated that I had HPV18 but that there were no abnormal cells or malignancy detected. Regardless, because I had had a procedure when I was 18 to remove abnormal cells (a LLETZ), my GP referred me to have a colposcopy, so they could have a better look at my cervix. I went for the colposcopy at the start of May; during this procedure they took two punch biopsies, in other words they took two lots of tissue for laboratory examination.

On the 5th of June I got a call from the hospital saying that I needed to come in to see them that day. My husband works in Africa & was away at the time so I got a girlfriend to come with me for moral support. At the hospital I was told I had adenocarcinoma, which is a less common type of cervical cancer. It just goes to show that even when you feel healthy & well, this can happen to any woman. Prior to getting diagnosed I had felt great; I had been exercising & had lost 20 kgs. I did have some irregular bleeding but it was so infrequent that I hadn’t really given it too much thought.

I had a cone biopsy on the 8th June to obtain a bigger tissue sample and to see the extent of the cancer, as the ectocervical margin was involved. I ended up having a modified radical hysterectomy at the beginning of August. They basically took everything including twenty lymph nodes but left my ovaries. The time in hospital was not a great experience as they struggled to get my pain under control. I got cellulitis (infection of deeper layers of skin) from a cannula which then caused superficial thrombophlebitis (inflammation which causes blood clotting). I spent a week in hospital lucky for me though I had my very supportive husband by my side throughout the whole ordeal and my mum, brother, sister and close friends all rallying around to help out where they could with kids and caring for me etc.

I have my first check up since my surgery next week & haven’t got my results back yet. I have had ongoing bleeding. I feel like this whole process has been made worse because I am not in a major city. Even though I have been able to have everything done in my home town, a lot of medical specialists aren’t based here so there have been delays with things like getting to see my Gynaecology Oncologist or receiving pathology results.

Don’t delay going for your cervical screening & go & get checked out if you have ANY symptoms, regardless of how small or insignificant you think it may be.