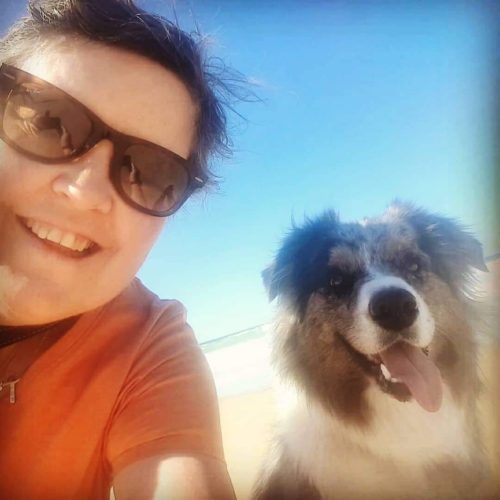 I was first diagnosed with cervical cancer (adenocarcinoma) in March 2008, exactly 1 month before our wedding. My doctor told us to postpone the wedding but we were determined to go ahead with it. We were married on a Sunday and the next Thursday I was  having surgery. I started chemo/radiation the next Tuesday. I had 8 weeks of chemo & radiation, then 72 hours of intense brachytherapy (which was awful!), but thankfully we were given the all clear!

That was until January 2016… I had an awful cough and started to cough up a bit of blood, so I was sent for chest scans which revealed a ‘mass’ on my right lung. A lung biopsy confirmed it was cancer. My oncologist did some investigating and it was discovered that the cancer on my lung was in fact cervical cancer. Not really understanding how cancer works, my oncologist explained that the cancer had metastasized. So it was back after 8 long years of being clear….we were devastated. We’ve been through chemo, radiation, surgeries, immunotherapy, the works! The tumour shrinks, comes back, shrinks again, it’s an ongoing round-a-bout. I know I’ll never beat this, so we go about every day as normal as possible and I try to live every day to the fullest.

Looking back, we were a bit blasé about the whole thing the first time around. The main issue we were dealing with back then was the possibility that we would never have children. Sadly it was confirmed after the treatment in 2008 that we wouldn’t be able to have children. Instead we have a beautiful Border Collie puppy who fills our lives with joy!

We’ve been in this fight now for almost 3 & half years and it’s scary/frustrating/sad/annoying. I could go on and on but instead we choose to remain positive as we believe that is half the fight against this dreadful disease.

Listen to your body! Only you know when something is ‘not right’ so get it checked as soon as possible and don’t be embarrassed.
Don’t be scared of cervical screenings. Yes, they’re not nice at all but trust me, having cervical cancer is much, much worse.